Mr. Anand Rathi, the founder and torch-bearer of the AnandRathi Group, is one of the leading financial and investment experts in India and South-East Asia. The gold medallist Chartered Accountant is an esteemed member of the ICAI and has over 40 years diverse experience.

Before establishing his own enterprise, Mr. Rathi had a long and illustrious career as a core member of Birla Group — the business group of legendary late Mr. Aditya Birla. He was the youngest president of Indian Rayon (now known as Aditya Birla Nuvo). He was instrumental in shaping the group's cement business and spearheading its foray into diverse businesses in manufacturing and services.

In 1999, Mr. Rathi became the president of BSE (Bombay Stock Exchange). He was the driving force behind the expansion of BOLT - the BSE Online Trading System. He also set up the Trade Guarantee Fund and played a vital role in setting up the Central Depository Services (CDS).

Mr. Pradeep Gupta has an all-embracing industry experience acquired from running a wide-range of businesses in the past. He started his professional journey with a family-owned textiles business. Later, his growing interest and love for financial markets drew him towards the financial services industry. He stepped into this industry with Navratan Capital & Securities Pvt. Ltd. and later joined hands with Mr. Anand Rathi to establish the AnandRathi Group.

With over two decades of rich experience in financial markets, he has played a pivotal role in laying the foundation of the Institutional Broking and Investment Services arm of the group. His ground-breaking spirit has driven the firm’s rapid growth — successful expansion into a strong network of franchisees and branches across India. Under his dynamic leadership the group has bagged several prestigious awards and accolades.

An avid investor and trusted advisor, Mr. Gupta is often seen sharing his views and insights in the media on macroeconomic aspects, domestic and international markets. He is also an active member of Rotary Club of Bombay.

Mr. Amit Rathi, 41 is a rank-holder Chartered Accountant and an MBA from New York University's Stern School of Business. He was instrumental in setting up the Private Wealth Management (PWM) & Investment Banking (IB) businesses of the Anand Rathi group. Amit is a thought leader in the financial markets and his views are regularly sought and featured by leading business channels and in the print media.

The Times of India, in 2008, listed Amit as one of the Top 51 Young Marwaris in India. He is a member of the Mumbai Chapter of the Young Presidents’ Organisation (YPO) and co-chairs the NYU Stern India alumni group. He is also a member of the Committee on Financial Markets and Investors’ Protection at the Institute of Chartered Accountants and ASSOCHAM National Council for Capital Markets.

Ms. Priti Gupta, an MBA (FMB) from SP Jain Institute of Management & Research, Mumbai, was instrumental in setting up the commodities desk, currency and Forex Advisory business. She leads the advisory team for commodity and exchanges globally with a keen focus on base metals and energy. Prior to joining the group, she was a director with Navratan Capital & Securities Pvt. Ltd. (a member of The National Stock Exchange of India).

Today, owing to her proficient leadership, Anand Rathi ranks amongst the top 5 financial services firms in Commodities & Currencies business and is well-known for its one-of-a-kind Forex Advisory. She has also established the group's association with international counterparts such as NATIXIS (an exclusive tie-up in India).

Ms. Gupta has been awarded “Woman Leader of the Year” (Financial Category) by the ‘Women on Top’ and NDTV Profit in 2011, organized by Igroup. She was also recognized for “Special Contribution to Commodities Business” in ‘Zee Business Best Analyst Awards 2013’.

Known for her sharp business insights, Ms. Gupta is an active member of National Executive Committee of Commodity Participant Association of India (CPAI).  She is often seen sharing her views on commodities and corporate currencies with the media and contributing to several related articles in business magazines.

Ms. Supriya Rathi holds an MBA in Finance from Leonard N. Stern School of Business - New York University.  She has 12 years of rich experience across financial services in insurance broking. She started her career journey in retail banking and equities research with leading organisations such as Hong Kong Bank and Solomon Smith Barney (now a part of Citi Group).

Her ground-breaking initiatives enabled AnandRathi Group’s foray into the Insurance Broking business, in 2002. Her leadership made AnandRathi a frontrunner in institutionalizing insurance broking in India.  She set the group’s foundation for a strong insurance distribution network and service penetration.

We have observed a fraudulent activity whereby forged messages are being circulated in the name of AnandRathi -company. These messages contain trading recommendations/calls which are sent to public in form of SMSs in the company’s name and style of communication.

AnandRathi strongly advises its clients, not to trade on such calls and beware of such unscrupulous communications. Be assured, that the company will never recommend you to trade with specific quantities or promise fixed earnings.

This activity has been reported to the relevant authorities and is currently under investigation.

If you come across any such communication, immediately report it to us by sending the screen shots of such SMSs and emailing it to smscomplaint@rathi.com.

Please refer to the snapshots provided below of such fraudulent messages vis-à-vis Anand Rathi's genuine trading calls via SMS. 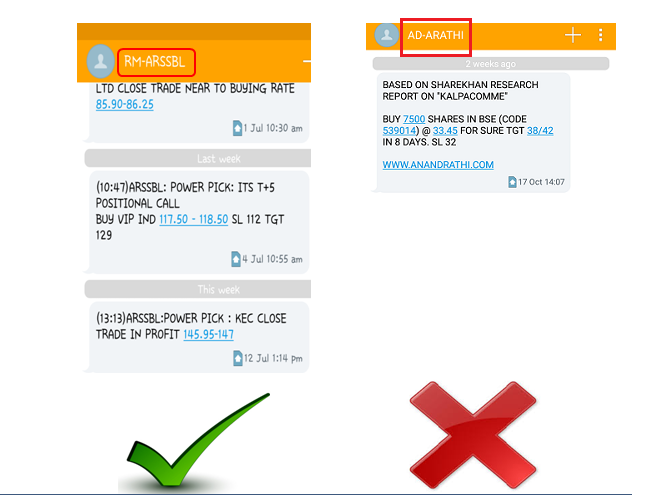